by Škjakto
I believe that the number words in Toki Pona, "wan", "tu", and "ala", could be used for a ternary or binary counting system. A number, for example the decimal 28, would be "wan ala ala wan" or 1001.

by janKipo
Both systems -- in several forms -- have been presented over the years. None have achieved any popular support in the community, which seems evenly split between not thinking that large numbers (bigger than three, say) are important and thinking that only a decimal place notation system can replace the present system. The systems work fine, but no one wants to relearn mathematics (or learn it for the first time, for that matter).

by Baerdric
Yes. I've recently posted about this using a reverse positional notation because we do not have place names (hundreds or thousands etc)

I think you can find the thread here with an introductory video.
viewtopic.php?f=29&t=2605

by janKipo
Well, not quite Roman style, but I get the idea. There would be a number of problems to iron out -- grouping, for example, and the possibility that one might want to use 'kulupu', say. just to refer to groups and 'nanpa' can't be used to demarcate number usage. And, of course, we still don't have a solution here for telephone numbers or PINs or other ID numbers, which pretty much force decimal notation.
Did Slavic languages really have no numbers or just no numerals, like Greek and Hebrew?
I don't get the technique of the last example and the second one is ambiguous (although the result is the same either way).

by jan Pina
Yeah. Phone numbers or other id's will be a pain without a Decimal notation. So old Slavic way or conventional Arabic numbers looks like only possible solution for this.
Old Slavic alphabet got no special characters for numbers. So they used alphabet letters to encode numbers.
See a table 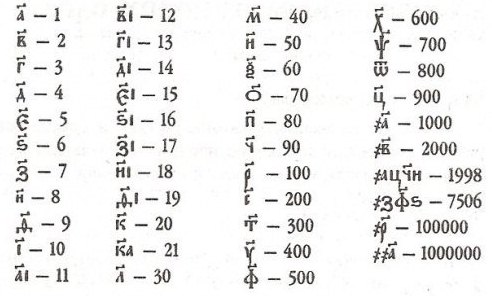 by janKipo
So Slavic had numbers, just not numerals and they made up that lack with a fairly clunky system -- as did all Europe until the arrival of Hindarabic numbers in the Crusades. This doesn't help tp a lot, although it does have nine consonants which would do nicely for numerals in a decimal system. But it seems to have the usual numerals already, so that is not the problem. The problem is an open-ended system of words to express any number (whole, for now -- fractions and the like come a lot later).

by jan Pina
Hi
I just learned that TP has more numbers than we even actually need.

For scientific and trade purposes people would use decimal notation anyway.

by janKipo
But that notation has no verbal equivalent, so is outside the language.
As for multiplication, we have no agreed on way to do that, but, if we did, the addition of a few more words would not make a significant difference ( how have you missed 'luka' up to now?).